Reboot Develop Blue 2019 took place in 11th to 13th of April 2019 in the legendary historical seaside city of Dubrovnik, also known as “real world King’s Landing” from HBO TV series Game of Thrones. The timing was also perfect since the 8th and last season of the series was in premier just at the following weekend 🙂  The conference was again at the luxurious conference resort – Sheraton Dubrovnik Riviera. The facilities are top notch and all key notes and meetings will take place at the lobby and confrere area of the hotel.

In 2019 the sixth edition the conference was revealing name and logo rebranding (with Blue edition in the same year being set in Dubrovnik, CROATIA during spring while Red will take place in Banff, Canada during fall) being set to grow again and go again level higher then previous iteration, reconfirming it’s position as the most unique, premier and high-end games industry and game developers event in Europe and one of the biggest worldwide. This year in Dubrovnik was present more than 800 participants from 120 different companies. Also record participants amount from Finnish game development industry, nearly 60 people! The main interest was around FINGERSOFT STAGE, where they presented the new logo of the company and also many good speeches that highlighted the Fingersoft game publishing arm Round Zero and their unique data driven approach to see and improve the performance of f2p mobile games. Also another Finnish company Matchmade – influencer network company hosted very interested talks about how and what kind of influencers developers should look for and use to reach their audience.

Apprien says big thanks to Damir Đuroviç and the whole organising team for a superb event! 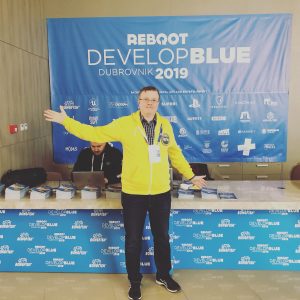